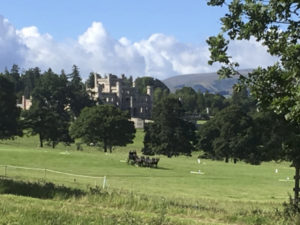 Last year Darren and I decided that this year we would visit Lowther driving trials in Cumbria. Numerous people had told us how fantastic the event is and so had to see it for ourselves. After contacting George Bowman we were offered the chance to stay on site and were asked if we would like to volunteer and help at the event with stewarding etc. which of course we were, and when I was told that Tony Bache would be the technical delegate for the event we were even more excited!

We arrived on the Wednesday evening before the show started, in the dark, and parked up to see in the morning fantastic countryside, views and Lowther Castle in the distance with competitors exercising in the practice rings.

Although we were volunteering there was plenty of time to look around the showground and the stands, so we started out on Thursday by walking the obstacles – well Darren walked and I went on my bike!  Obstacle 1 was in front of Lowther Castle on a very steep bank and I remember thinking if this is the beginning I can’t imagine what the others are like!  Darren walked every obstacle as if he were there to drive them and we had multiple discussions on which way we would go. Obstacles 2 – 6 were all closely located alongside the showground with run outs in between and by now my head was completely muddled but Darren was still talking to himself and walking them. Obstacle 7 – the Lowther bridge was incredible, and I really couldn’t imagine driving over it – this just showed the level at which these horses and drivers were competing at. The final obstacle was situated within part of the showground allowing the sport to be seen even by those who were not venturing onto the course. As the show itself did not open until the Saturday there was a nice atmosphere of driving trials competitors and spectators.

Friday arrived, and Darren was stewarding on one of the two dressage arenas. This gave us both the opportunity to really watch and focus on competitors and how they performed their dressage test. Classes ranged from novice to advanced, singles to teams.

The marathon and cones were split over Saturday and Sunday with ponies doing the marathon on Saturday and cones Sunday and horses vice versa. Tony Bache and other event coordinators held a briefing on the Saturday morning in the show marquee and everyone was assigned to an obstacle for the 2 days. We were on obstacle 3 – alongside the showground but with good views of other obstacles. We were introduced to the other group members, some very experienced, who explained what was required, and others novice like ourselves. We made our way to the obstacle and responsibilities were decided of which I was on the public timer and Darren was required to verbalise the route taken and if gates were cleared correctly so it could be documented. The importance of health and safety soon became apparent when a carriage overturned and Darren managed to catch the horse, which initially I did think what the hell is he doing but later, on reflection, thought I hope someone would do that if I ever ended up in that situation!

We learnt so much and it really makes you appreciate the organisation behind any event and how important volunteers are, who give up their time, probably because they really enjoy it, but without them the events couldn’t take place.

The final competitors completed the marathon on both days by around 3.00pm allowing volunteers to look around the showground and the trade stands. Results were available for competitors late Sunday afternoon and then we set of for home. I would encourage anyone who wants to learn more to go and volunteer at a national or regional event as it is a fantastic opportunity to learn so much and meet some really nice people.

We had a great time at Lowther and are looking forward to next year!

The website is designed and administered by volunteers representing WDDC members. Please direct any feedback regarding the content of the site to the Club Secretary via the link on the Information page.

View all posts by: Web admin